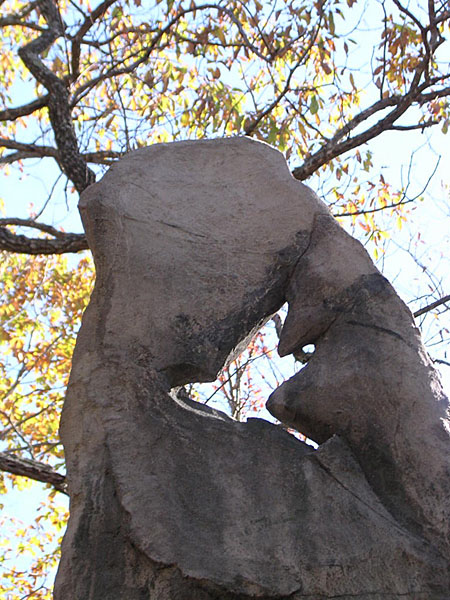 Roger Halligan has been creating sculpture professionally since the mid seventies.  After graduating with an MFA with honors in Studio Arts from the of in 1977, he moved to where he became an exhibit designer for the He left the zoo in 1992 to devote his time to his fine art  work.  In 1993, his design team was awarded the State of North Carolina Governor's Award for Excellence for their work in the design and construction of the Sonora Desert Habitats for which he was lead designer.

His art is in many public and private collections, including the Jule Smith Collins Museum at Auburn University, the , Greensboro, NC; the in , ; and the William King Museum, Abingdon, VA. The cities of North Charleston, SC, Greensboro, Carrboro and , the for the Advancement of Teaching, , ; the Triad Regional Farmers Market in Colfax, NC.,  the UNC- Asheville Kellogg Center in as wll as  Rock City, Lookout Mountian, GA and the Edwin Hotel in Chattanooga.  His work can be seen regularly at  Chenoweth . Halligan Studios in Lake City, SC.

Other distinctions include curating the Just Racin’ - Artists look at NASCAR exhibition for the for North Carolina Art and being selected as Artist in Residence at the in 1997.   Halligan is also a founding member and past president of the Tri State Sculptors Educational Association, Inc. and the past  Vice President of the Mid South Sculpture Alliance.  I

was awarded an ArtsMove Chattanooga Grant and relocated his studio and home to downtown Chattanooga, Tennessee. In 2019, he and his wife, the artist Jan Chenoweth  reelocated their home and studio to Lake City, SC.